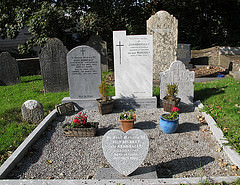 Birkenhead monumental provides headstone inscriptions for parents in Ellesmere Port. It is an established company of 30 years. It was set up by David Williams who was an excellent master craftsman, letter cutter and carver. And today, the company is well known in the Wirral and surrounding areas including Manchester and Liverpool. The company, which has recently moved to its factory settings, provides a wide array of services including delivery and fixing.

A couple of years back we designed in Ellesmere Port, headstone inscriptions for parents for a family who had recently gone through a traumatic event. The family called us and requested that we renovate their parents’ headstones which looked old, unkempt and dirty after years of harsh weathering. Our experienced team took over the project and a week later, the headstones looked good as new. A headstone often encapsulates the deceased life in few words or a well-thought verse. These are the departing, often comforting words which the close relatives and friends leave on the headstones of the deceased. If you require custom-made headstones and inscriptions, you can contact Birkenhead Monumental. They have a large database from which you could choose the headstone design and you can even choose the materials to be used, the size, the lettering, and the words you want to include on the tombstone. The origins of headstone inscriptions go back to the 19th century when gravestones gained importance. They were used as a means of memorialising the dead. Since tradition and customs were greatly emphasised during the Victorian era, cemeteries were lavishly decorated and would often include sculptured designs, artwork and symbols such as weeping willows, swords, doves and flowers. And today, the practice continues as the family of the deceased want the best representations for the departed.

If you want to renew or renovate the headstone inscriptions for parents in Ellesmere Port, do not hesitate to contact the leader of monumental designers in the country, Birkenhead Monumental. For any additional information, call us on the 0151 609 0117.

Due to the latest Government advice,our showroom is closed to the public except for  pre-arranged appointments

Please contact us via one of the options below to book a Personal Appointment.